Qantas main international hubs are at Sydney and Melbourne airport, as well as operates a significant number of international flights. Qantas owns Jetstar Airways and when it became privatised in 1993, became one of the most profitable airlines in the world.
Qantas has a total of 299 aircrafts and 29,350 employees as of 2015, and its closest competitor is Singapore Airlines (SIA). Qantas goal is to be the world’s best airline, providing travel experiences and putting safety first at all times. Since 2006, Qantas has saved over 2.5 million tonnes of carbon emission through its Qantas Future Planet Program. This is Qantas’s program for their sustainability, environmental and social initiatives.
In 2008, Qantas ordered 20 A380s, and using Required Navigation Performance and air traffic management, helped to save thousands of kilograms of carbon emission. In 2012, Qantas won an award for setting the standard for large organisations and has won another 3 awards till date. 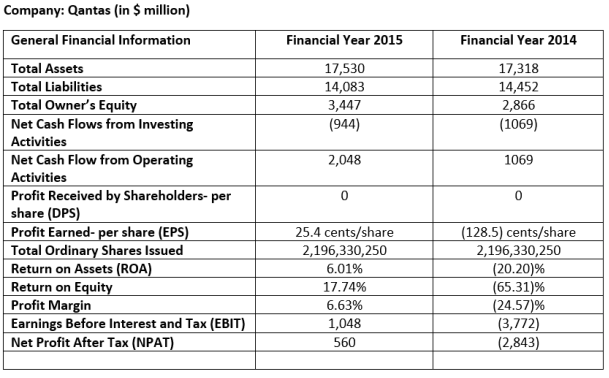 Financial Information and Analysis of Qantas

As seen in Table 1.0, Qantas had a negative return on assets (ROA), return on equity (ROE), as well as profit margin. According to Max Mason (2014), the statutory loss does not represent a cash loss to the company, rather it is a paper loss in the value of its assets. However, in 2015, Qantas made a comeback and made an increase of 26%. Moreover, Qantas made an 83% increase in return on equity (ROE) and their profit margin increased by 31%. This shows that Qantas’s negative ratios were most probably caused by lack of customers wanting to travel.
ROA measures the return earned by management through operations as well as reflects the result of the entity’s ability to convert sales revenue into profit.
ROE measures the rate of return on the capital invested by shareholders. A sustained high ROE attracts new competitors to the industry and eventually erodes excess ROE.
Profit margin is a measure of profitability. It is used to calculate the net profit as a percentage of the revenue.

Table 1.1 Liquidity Analysis of Qantas
When calculating current ratio, it is best if the ratio is 1 or more than 1. Most people regard a current ratio that is less than 1, as a company that is facing insolvency. While Qantas in this case has a ratio of less than 1, it is still comforting to know that their assets still contain enough cash and receivables, and one of the non-current liabilities contains revenue received in advance. Although it is unearned, when the amount received is earned, it will be credited accordingly.
2.3 Profitability Ratios Between Qantas and SIA

Table 1.4 Qantas and SIA Financial Statement 2015
2.3.1 ROA Comparison Between Qantas and SIA
Earnings Before Interest and Tax (EBIT) shows the earnings generated by the company, ignoring tax and debt. A high EBIT would mean that the company is either earning a high revenue or have low expenses. As seen in Table 1.4, although the revenue earned is about the same, SIA’s expenditure is higher, thus resulting in a lower EBIT. Adding on to that, SIA’s asset is higher than Qantas, thus resulting in a lower ROA.
The ROA shows that Qantas is able to convert sales revenue into profit better than SIA as well as better at generating income from its asset investments. Moreover, this translates into efficiency in using its resources so as to generate a good return for investors.
2.3.2 ROE Comparison Between Qantas and SIA
As seen from Table 1.4, Qantas NPAT is higher than SIA, which translates into Qantas being better at earning a return on the equity provided to them. That can be seen from the amount of equity both companies have. For SIA, this is what we call a capital funded company. A capital funded company relies on investment from shareholders to operate and for SIA, it is shown that they are not making full use of their investments to enable a good return to their investors.
2.3.3 Profit Margin Comparison Between Qantas and SIA
Profit margin is a ratio used to calculate a company’s financial performance. Commonly, a low profit margin would indicate lower sales than other companies in the industry. As seen from Table 1.3 and 1.4, Qantas has almost the same revenue, but a higher profit margin than SIA, which could indicate that they are cost conscious, therefore have less expenditure.

Corporate Social Responsibility (CSR), is a form of self-regulation that companies engage in, to provide some social good, beyond the interests of the firm, regulators and environmental protection groups. By undertaking CSR, companies are able to reach out to consumer’s trust through positive public relations and encourage the company to make an impact on the environment and stakeholders. Qantas partners with organisations such as Make-A-Wish, e-motion21, Mardi Gras and UNICEF to promote a positive change.
3.1 Make-A-Wish Australia
Qantas is the official airline of Make-A-Wish Australia, an organisation that grants wishes to children with life threatening illnesses. Since 1985, over 8000 wishes had been granted and since 2008, the Qantas Foundation has donated over $5.7 million for charitable causes in Australia. Qantas also helped fulfil the wish of a boy, with stage 4 Wilms tumour, who wanted to be a pilot by bringing him to a plane simulator as well as showed him around the workings of a plane.
3.2 E.motion21
E.motion21 is a non-profit organisation that aims to improve the lives of people with down syndrome through dance, fitness and performance. As a corporate partner, Qantas supported the organisation by sending 18 dancers and their families to South Africa for the World Down Syndrome Congress and even gave Lauren Potter a surprise serenade when she touched down in Australia.
3.3 Mardi Gras
Also known as the Sydney Gay and Lesbian Mardi Gras in Australia, it’s a parade to celebrate Lesbian, Gay, Bisexual and Transgender (LGBT) pride. As a major partner of the parade, Qantas celebrates the spirit of diversity by having their own “Gay 380” float. Qantas is also a “Gay-Friendly” airline, with non-stop flights to Australia and New Zealand, countries with a thriving LGBT community.
3.4 UNICEF
Providing humanitarian assistance to children and mothers in developing countries, UNICEF is a non-profit organisation that relies on government and private funding. UNICEF partnered with Qantas to create the Change for Good program, where Qantas passengers unwanted spare change were collected and donated to UNICEF for the purpose of providing textbooks for education or protecting children from diseases. This concept has helped raise at least $28 million over the past 23 years.

Qantas takes initiative in protecting the environment on both land and air, and has partnerships that promote sustainability and conservation. The most important initiative would be in the air, where planes are frequently releasing emissions that slowly harms the ozone layer. Since 2007, Qantas has been reducing harmful emissions, making them one of the industry leaders in environmental protection. As of 2014, Qantas managed to reduce electricity consumption by 9%, water consumption by 11% and landfill by 20%. To reach their 2020 target, Qantas has been using Sustainable Aviation Fuel (SAF), investing in fuel efficiency, flying carbon neutral, and recycling. On the ground, Qantas protects the environment indirectly by using natural gas for their headquarters as well as a reduction in utilities used.
4.1 In the Air
4.1.1 Sustainable Aviation Fuel
SAF is now in its second generation and currently, 2% of global emissions come from aviation and is expected to rise to 3% by 2050. Although solar, electric and hydrogen aircrafts are being researched on now, it is still more feasible to use SAF due to aviation’s need for high power-to-weight ratio.
In 2012, Qantas was the first Australian airline to use SAF to operate a commercial flight and have partnered with Shell Australia and the government to explore the production of SAF in Australia. In a study conducted with industry partners, findings have shown that SAF can result in the creation of 12,000 clean energy jobs, a 17% reduction in emissions and a $2 billion reduction in the reliance of oil imports.
4.1.2 Fuel Efficiency Program
In recent years, Qantas has phased out old airplanes and purchased newer ones that are equipped with the latest technology and engines. Some of the airplanes include the Airbus A380, Boeing 787 Dreamliner and Airbus A320 neo. Other methods of fuel efficiency would include weight reduction by investing in lighter equipment or adjusting the amount of portable water the plane carries based on passenger needs and sector length.
4.1.3 Flying Carbon Neutral
Since the launch of the Fly Carbon Neutral program in 2007, Qantas has managed to offset over 1.8 million tonnes of carbon. Carbon offsetting in business terms, is the purchasing of carbon credits to enable businesses to compensate for their carbon emissions. For Qantas, not only do they offset their employee’s carbon footprint, but each time a customer flies on Qantas, they can choose to offset their share of carbon emissions. In other words, you contribute a sum of money equivalent to your carbon footprint and Qantas will use that contribution to fund carbon offset projects that provides genuine, lasting environmental and social benefits.
Qantas does not earn from the contribution and Fly Carbon Neutral is the largest airline offset program in the world. Qantas’s carbon offset projects include, protecting the Tasmania’s wilderness, empowering rainforest communities, improving Cambodian air quality and protectingallow the Peruvian amazon.
4.1.4 Recycling
Qantas was the first Australian airline to introduce inflight recycling and has since recycled 390 tonnes of paper and 200 tonnes of bottle per year. Qantas takes recycling very seriously and pushes their suppliers to produce more sustainable products and less packaging. For example, currently, all the paper cups provided on board are made from 35% recycled paper.
Qantas also tries to get their customers to join in to save the environment by assisting the cabin crew to separate the recyclable items for collection.
4.2 On the Ground
4.2.1 Tri Generation Projects and Campus Redevelopment
Qantas reconstructed their headquarters by building Australia’s largest tri-generation project in Sydney. The system allows cooling, heating and electricity by using natural gas as the fuel so as to produce more efficient, lower carbon energy for the headquarters, catering centre, jet base and domestic terminal.
The end result would be a reduction of 23,000 tonnes of carbon dioxide emissions per year, an equivalent of taking 7,000 cars off the road. It will also raise the energy efficiency rating from a NABERS 1.5 star to NABERS 5 star.
4.2.2 Utilities Reduction
In order to achieve their water and electricity targets, Qantas purchased LED lights to improve lighting efficiency as well as procuring energy efficient appliances. Rectification of water leaks and installing water efficient fixtures was done as well.

Although low current ratio was seen, I would recommend anyone to invest in Qantas as the profitability ratios show a more than significant improvement between 2014 and 2015. This is much more evident when compared to SIA, another top leading airline in the world. Moreover, Qantas engages in various environmental and social aspects to make sure they are a well-recognised company. 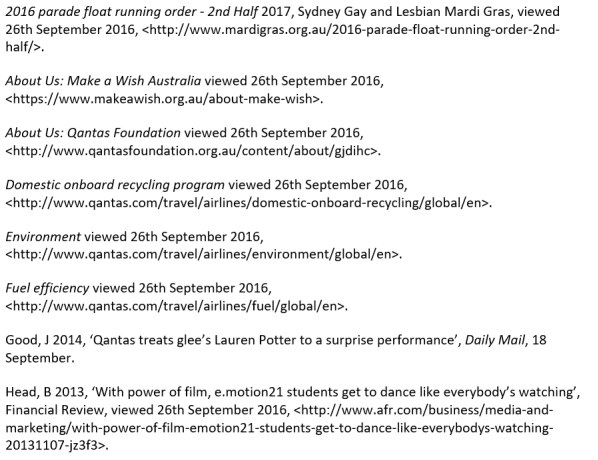 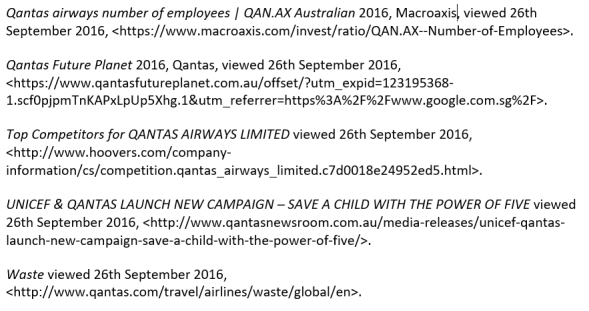